I was tidying out the drawer in my nightstand this evening. It's a bit of a catch all messy area usually containing a hair brush and comb, 10 hair ties, around a thousand kirby grips and a notebook and pen.

The thing is I found I didn't have just one notebook. Nope I had 7! And that doesn't include the other's I own which are 'strategically' placed around the house. 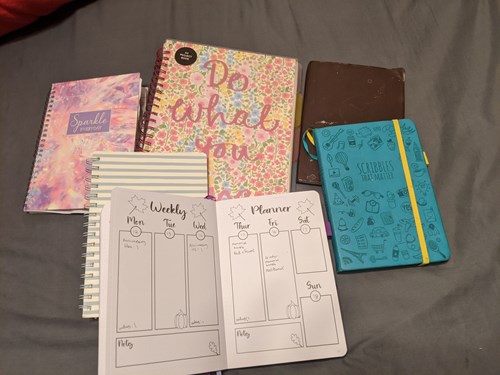 So why so many notebooks?

Well firstly I'd just like to say that 3 of them are bullet journals. The one at the front, the turquoise one on the right and the brown one underneath it.

I started bullet journalling in 2018 - I was inspired by pinterest images and youtube artists such as Amanda Rach Lee. She created these beautiful layouts which looked so easy and I thought, I can do that!

I bought a very cheap square notebook from wilko's (to this day I think it's ugly), because I wanted to try journalling with grid or square formatted pages but didn't want to spend too much in case I didn't stick with it. Truthfully I didn't journal much, my layouts weren't as nice as the bujo artists (I was lacking inspiration and didn't do enough research) but I did Journal more than I'd expected to so in January 2019 I decided to have another go.

In 2019 I purchased a Scribbles That Matter Journal with grid layout and I used it a lot. Here are just some of my covers from that year:

I participated in a Doodle challenge, came up with some lovely spreads and felt quite motivated at the time so really used them and in 2020 received another Scribbles that matter journal which I am currently using (less than in 2019 but that's a blog post for another day).

so why all the other notebooks

My bullet journal became the place for my 'best work', If I wanted to scribble down an idea in rough, I didn't want to put it in my journal because I wanted it to look nice. In addition I wanted somewhere to practice the faux calligraphy and doodle sketches so the blue and white notebook became my journal practice book and the place for random 'stuff' (which had no theme to it).

In Summer 2019 I started the Keto Diet, I wanted a place separate to my journal to write my goals, achievements and recipe's without taking over the journal (Especially if I didn't maintain it - I didn't want to be reminded) so I started a weight loss journal. I didn't maintain it long as I stopped keto 2 months later due to the conception of a certain little boy. I want to jump back on and will use the notebook again but the motivation isn't there yet so the notebook is 'on hold' on my night stand.

The last of the notebooks is the big one - Its a project one, I tend to use it to write notes when doing research projects, - usually business ideas (that don't come to fruition). Anything where I think I need a few sheets of A4 to write - this book comes out but its also probably my least used.

I have other notebooks too, 1 with knitting/crochet patterns in with my yarn ephemera and I also have a digital notebook mainly used for my etsy store and ideas for this blog.

All my notebooks get used at some point or other and the definitions for the uses does get blurred over time based on whichever one was closest at the time.

There's just something about a new notebook, they look pretty and feminine (usually), they smell nice when new and they have the promise that one day they might hold the most wonderful of ideas that you haven't have yet.

How many notebooks do you own? Let me know in the comments below.